If you want an exceptional book on World War Two air combat...

Then avoid at all cost FLYBOYS. 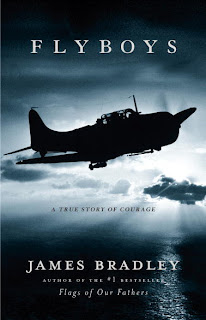 Now understand, I love to read books about World War Two, and especially the air war.  I have read two different books on Gregory Boyington and the Black Sheep, I have read books on The Flying Tigers, and I have read countless books on air war over Europe, North Africa, Italy and Sicily and the Pacific.

I have read books from the German perspective, and the Japanese perspective, as well as from the allied perspective.  I have even read a book about perhaps one of the most prolific aircraft designers of World War Two, Willie Messerschmidt.

However FLYBOYS, is the first book I have ever not finished.

Well first off, an explanation of what the book, is supposed to be about, and I say supposed and soon you will understand why I say that.

The book, is supposed to chronicle the lives of several  Navy pilots, who flew against the most heavily fortified Japanese installation of the war, a radio station used by the Japanese to intercept U.S radio transmissions of . information and plans, and forward this infromation  to Japan, so that counter measures could be taken.

Great set up for a book, sounds like a real nail biter, and it could have been.  However James Bradley did not just do a simple story of men against a fortified enemy on a small island known as Chichi Jima, a small island close to Iwo Jima, and one of Japans' outermost frontier islands of their homeland.

That would have been far too easy, and God forbid that James Bradley do anything simple.  After setting up what we think the progress of this book shall be James Bradley decides to do something completely different , he instead gives us a history lesson, on the background of both Japan and the United States.

The history lesson is to show how both nations developed, what led to their current mindsets by 1941, which of course is the mindset of both nations by 1945 when this story takes place.

The history for Japan, holds a few surprises, however in all honesty part of what he relays in "Civilize ation" read like experts from James Clavel's Shogun It is if he lifted these passages, word for word from Clavel's book, but did not even mention him as a reference.

Bradley shows here also how America was not so different from Japan, in its philosophy and actions.  He uses the mis information concerning the Battle of Sand Creek in Colorado, and expands on his theme with references to how American Forces brutalized Filipinos in the Spanish American War of 1898.

Although this draws a parallel in the two countries, it also sets a pattern for the rest of the book.  The pattern is one of confusion, where one minute we are seeing the mindset and actions of the men being drawn into this battle in the here and now, and showing how both Japan and the U,S, are capable of committing the same atrocities with little or no differences in how they carry out actions, without consideration of consequences to their enemy.

This split personality wears down the reader, and shows up at inappropriate times.  Just as we are on a verge of seeing something rise to the surface and getting close to the epic event that took these men's lives, Bradly suddenly pulls another history lesson and lecture on how both countries are guilty of terrible actions.

I had gotten to "To the Pacific"  and was thinking good, now we get to the meat of the story, we will see the principles interacting o their carrier, en route to battle and up to the eve of battle.  But no, it starts off looking as though that is the direction of the chapter, then boom!

Once again Bradley pulls yet another history lesson, lecture from centerfield.  This after an entire chapter that discussed American and Japanese philosophies in war, and again how America was guilty of some terrible things.

Bradley does this so often, you begin to think he has written an apologist story to show how crooked the United States was again, and how similar our culture was to the Japanese.

This book was long, plodding and draining, three things no good book ever should be.

What is sad, it had a great idea, just terrible execution.

Avoid at all cost FLYBOYS.
Posted by Mark Paul at 10:23 AM No comments: